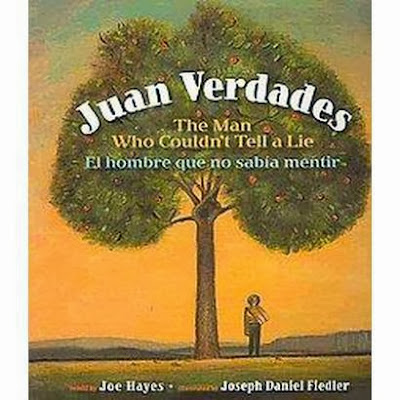 Hayes’s story is a revision of a European variant of “The Faithful Servant,” and also draws on versions from New Mexico. In this telling, which appears to be set in colonial Mexico, a wealthy man bets his ranch that his foreman is so honest that he could not tell a lie. In order to win the bet, the beautiful daughter of the other rancher conspires to seduce the foreman into stealing all the apples from his employer’s “manzano real”—“royal apple tree”—and lying about how the apples disappeared. Foreman steals the apples yet maintains his integrity, foreman and daughter fall in love, ranch is lost but remains in the family, and everyone celebrates.

Rather than enhancing the story, Hayes’s “literary treatment”—assigning names to the characters, softening the plot, and inserting a lot of dialogue to “carry the narrative and clarify the characters’ motivations”—raises questions about the story’s cultural content:

• Why does the rancher’s daughter demand that the foreman strip the apple tree and bring all its fruit to her? It would have made more sense had she demanded that a prized animal be slaughtered and its meat brought to her. But in “softening” the story so as to avoid the scene of an animal’s being butchered, Hayes erases the story’s cultural logic.

• Why would the foreman agree to pick all the apples? Even if he were in love with the rancher’s daughter, he’d know that a whole wagonload of apples would benefit nobody. They’d spoil before they were consumed.

• Why would wealthy Mexican ranchers care so much about apples? Among apple aficionados, there might be some competition, but not to this extent.

• Why would a wealthy rancher’s daughter fall in love with the foreman, and continue to conspire against him?

• Why does the rancher’s daughter, an upper-class colonial Mexican woman, appear as a “barefoot seductress” in every illustration of her: inside, outside, even at her own party? Besides “gang girlfriends,” this is a common Hollywood stereotype of Latinas.

• Finally, in the English text, the rancher wants to know who picked his apples: “Some fool picked them?” And the honest foreman begins to explain: “The father of the fool is my father’s father’s son.” But in the Spanish text, he says, “El abuelo de ladrón es papá de mi papá” (The thief’s grandfather is my father’s father). This is totally different. Why is he a “fool” in one language and a “thief” in the other?

Fiedler’s oil paintings, on a palette of bejeweled earth-toned colors, are darkly depressing. Especially so is the one of the worried rancher riding away after having bet his ranch. It reminds me of James Earle Fraser’s 1915 iconic sculpture, “The End of the Trail,” in which a dejected Indian guy slumps over his equally dejected horse. I mean, really depressing.

Had Hayes decided against a contrived “literary treatment,” infusing his version with culturally logical content instead—and way fewer words and dialogue—Juan Verdades: The Man Who Couldn’t Tell a Lie / El hombre que no sabía mentir could have been an entertaining story. As it stands, it’s not recommended.