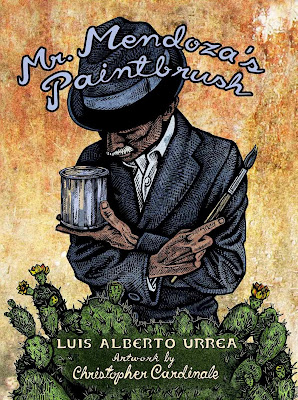 If you happen to live in the green, wet village of Rosario, Mexico, in the state of Sinaloa, “almost bubbling with humidity and the smell of mangoes,” a place where the river goes on a shopping spree and grabs up turtles, chickens, cows, old cars and washing machines; where mummified monks occasionally pop out of cathedral walls; where vast sections of silver mines are known to collapse and take part of the village with them; and where the village’s inhabitants have no discernable conscience—if you happen to live there, you’d better watch out: Mr. Mendoza, the man with the paintbrush, has come to visit.

The self-proclaimed “Rey de Graffiti de Todo Mexico,” Mr. Mendoza, in perfect cursive script, paints messages all over the village: on the city-limits sign (“No intelligent life for 100 kilometers”), on its bridge (“Upend hypocrites today”), on the wall facing the street (“Turn your pride on its back and count its wiggly feet”), and even on its inhabitants. Yes, Mr. Mendoza has been known to “graffito malefactors as though they were road signs.”

After what may have been a celestial apocalypse, there is found, among other things, the ghastly remains of a mummified monk—obviously an evangelist, as signified by the way the bones of his second finger point heavenward—and painted on his chest is this warning: “How do you like me now? Deflated! Deflate your pomp or float away!” Yes, Mr. Mendoza, with his paint-dripped commentary, is everywhere.

Indeed, Mr. Mendoza has set himself up as the conscience of a conscienceless community, whose residents don’t know what to make of him—or maybe they do and they’re just not saying. Far from afraid of offending, he chugs a bottle of beer and lets out an enormous belch, “the cry of the water buffalo, the hog.” “I give it to you,” he shouts, “because it is the only philosophy you can understand!”

The unnamed narrator of Mr. Mendoza’s Paintbrush is a young man who tells stories about his village when he was a boy—and a particular story about the humiliating punishment he and his friend suffered and the lessons they may or may not have learned. After he catches the two boys ogling some young girls who are bathing in the river, Mr. Mendoza grabs them (the boys, not the girls), tears off their clothes, paints on their faces (“pervert”), their chests (“Mother is blue with shame”), and their rumps (“This is what I am” and “Kick me hard”), and forces them to run through the town. The tables have been turned: “I suddenly realized that the girls from the river had quickly dressed themselves and were giggling at me as I jumped around naked. It was unfair!”

And then, one day—maybe the day the villagers had been praying for—Mr. Mendoza decides he has had it with them all: “Social change and the nipping of complacent buttocks was my calling on earth,” he announces, and a few days later, “with a virtuoso’s mastery,” he leaves. Dramatically, magically, in a way no one would have or could have suspected, but to everyone’s applause. Have the villagers learned their lesson(s)? Probably not.

Cartoonist and muralist Christopher Cardinale’s detail-rich illustrations, in a woodblock style of dark, muted earth tones, with lots of shading and thick black lines, enhance the surrealism of the story. There’s more than enough gore and grit to grab adolescents—especially boys—who don’t especially enjoy reading but are drawn to graphic novels.

In a high-school classroom involving adolescents of both genders—or even with younger students—this part horror story, part morality play, part pure grisly fun, can catapult a discussion about how boys treat girls and the consequences of behaving badly. Mr. Mendoza’s Paintbrush is highly recommended.