Sammy and Juliana in Hollywood 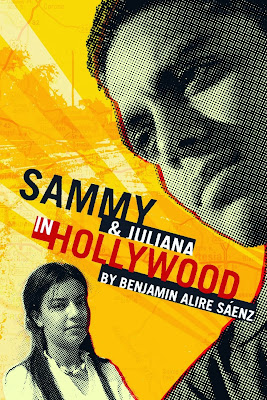 The Hollywood of Sáenz’s first novel for young adult readers is a ragged barrio of Las Cruces, New Mexico, where Sammy Santos and his friends live in the year 1969. Toward the end of his junior year of high school Sammy begins to notice classmate Juliana Ríos, whose self-confidence in the face of racist teachers inspires Sammy. Juliana, however, hides a desperate home situation that results over the summer in her violent death.

Afterward, Sammy wonders if he will ever love another girl again. His mother died years earlier, and over the next year, Sammy endures more losses—a neighbor’s husband, a best friend drafted and then killed in Vietnam, another friend dead of a heroin overdose, two gay classmates brutally beaten and then driven out of town by bigoted whites. Along with the troubles, however, comes Sammy’s political awakening, when he and his friends campaign for a change in student government, organize a strike against strict dress codes, and pass out armbands against the war. These struggles give Sammy and his friends a sense of hope and purpose and bring him closer to his father as well.

Sáenz is an acclaimed poet, and his story sings in the language of young people who move effortlessly between English and Spanish and use both languages to understand their world. The emotions expressed are honest and powerful—true to the characters’ culture and time period, yet so deeply felt that teenagers of all backgrounds today can identify themselves and their friends in the unforgettable cast. There are many priceless moments when the teens stand up to authority figures, showing that resistance is possible and hope exists in the bleakest of circumstances. One of the most memorable is when Sammy, five weeks from graduation, stands up to a dictatorial school administrator, Colonel Wright, who tries to shut down the student protest against the war on Vietnam:

He grabbed my arm. I hated the warmth of his hand. “Pifas is dead,” I said. And he let go of me. He knew who I was talking about. He’d read it in the newspaper, he’d seen a picture of Pifas’ mother kissing his coffin, clutching a flag—clutching a flag instead of clutching a son. God. “Epifánio Jose Espinosa was killed in action. In Viet Nam. Epifánio. They brought him home. Not all of him, Colonel. They couldn’t find his hands. Blown clean off. His hands, Colonel, they stayed in Nam. His hands stayed there, Colonel. Say it. Goddammit! Say his name for me.” He grabbed my arm again and started dragging me toward the office. But I wasn’t going to let him. I pulled away from him. I was stronger. He knew I was stronger. “Epifánio,” I said. “His name meant epiphany. It’s what happens at the end of a story or poem when something is revealed. It means we’ve learned something.”

As I reread sections to finish up this review, I am in tears. Sammy & Juliana in Hollywood is that strong, that good. Highly recommended.