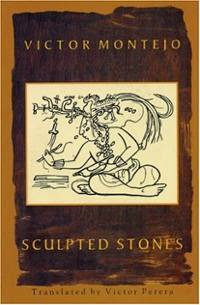 If our ancestors came to life
they’d surely give us, their descendants
thirteen lashes for being
sleepwalkers and conformists.
They always advised us
to struggle, build and forge ahead
so that no one’s left behind,
and no one’s forgotten by his brothers.
Yet today we Maya
remain hushed up
and have even forgotten the message
that might inspire us to break the silence.
That’s why if our ancestors came back to life
they’d give us thirteen lashes
to cure the amnesia of centuries
which has made us forget our names.

Victor Montejo is a poet, a human rights activist and an anthropologist, studying in depth his own people. After the massacre of his village in 1981, in which Guatemalan soldiers killed his brother, Montejo’s name appeared on a death squad list and he was forced to flee to the US. Since then, his life’s work has been to make known, in a variety of ways, the continuing human rights violations confronting the Mayan peoples.

After Testimony: Death of a Guatemalan Village, after The Bird Who Cleans the World and Other Mayan Fables, after a spectacular children’s version of the Mayan sacred book, the Popul Vuh, comes this book of poetry, Sculpted Stones. Here, in Spanish and English, Montejo’s poems express the resilience of the Mayan peoples, expose the Guatemalan army’s attempt to destroy the Indigenous population, and give lie to textbook anthrobabble about “history” and “culture.”

In the first poem, “Interrogation by the Ancestors,” Montejo asks,

Just think:
what can we say
to the ancients
when they return
with thunder and lightning
and ask about the fire
they left with us
in the cone of the great volcano?

And for the poor, betrayed, sad, humiliated, plundered, frightened people, there is this advice (beginning, of course, with an anthropological discourse):

Among the Maya
to cure a fright
you put a fresh-laid egg
in the armpit
of the frightened person
and in that way
the self-worth and health
that the phantom has stolen
will return to the afflicted.

But, how can we cure
the pain and fear
built up over the many centuries
of plunder and negation
of our Mayan identity?

Someone said
the egg is a great idea,
but in our day it’s better
to confront
and do battle
with those causing the fright,
then endure the centuries
warming turkey eggs
in your armpits.

This is really good advice. Sculpted Stones is testament to a people’s tenacious determination to survive in the face of centuries of colonization. Highly recommended.