In 1992, Indigenous and human rights activist Rigoberta Menchú Tum’s Nobel Peace Prize brought to a world audience the truths of the U.S.-orchestrated and –supported Guatemalan government’s 36-year campaign of genocide against the Maya there—and of one of the longest guerrilla resistance movements in Latin America. After her brother and mother were “disappeared” and her activist father was tortured and burned alive in the assault on the Spanish Embassy in 1980, Menchú went into exile and took up residence in Mexico, where she taught herself Spanish in order to denounce to the world the atrocities committed by the Guatemalan army.

Despite the hardships and poverty her people have endured—and rebelled against—ever since the Spanish conquest, Menchú’s wonderful recounting of her childhood stories in these titles, in close collaboration with Guatemalan author Liano, shows what it is to live with beauty and integrity, with land, culture and community. Domi’s oil paintings, on a jeweled palette of all the colors of the Mayan forests, jungles and mountains, are a luminous symphony of colors and images. 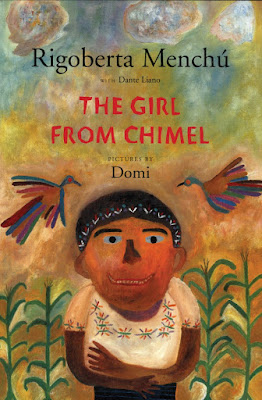 As The Girl from Chimel begins, Rigoberta introduces herself and her village:

I am Rigoberta. Chimel is the name of my village when it’s large, and Laj Chimel when it’s small, because sometimes the village is large and sometimes it’s small. During good times, when there’s honey and the corn is so heavy it bends its green stalks, when the yellow, green, purple, white and multicolored orchids bloom, displaying their beauty, then my village is big and it’s called Chimel. During bad times, when the river dries up and ponds can fit into the hollow of my hand, when evil men walk the earth and sadness can hardly be endured, the village becomes small and is called Laj Chimel. Right now, I’m remembering Chimel…

It is in the hearts of the people of Chimel, then and now, that the old stories reside. Traditionally, told stories such as the ones in Menchú’s trilogy teach children how the world works. For young Rigoberta and other Mayan children, this is how they are taught about the history of the land and right behavior; about compassion, courage, and generosity; about asking permission from the nahuales, the spirits who reside in everything; about planting seeds and harvesting fruits; and ultimately, about fighting injustice and struggling for a better world. 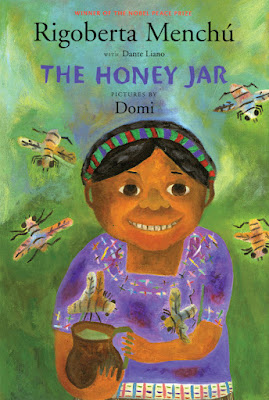 In The Honey Jar, Menchú imparts some of the cultural knowledge she learned as a child: How Grandfather Sun and Grandmother Moon created the stars, and Mother Earth and Father Sky, whom they carefully instructed in the creation of sea, land, plants, and animals. How each creature was assigned to be a nahual, a keeper of something. How the elders were given power and wisdom and why they deserve respect. What happens when people violate nature’s laws and don’t apologize and what happens when they do. How monkeys are descended from humans (not the other way around). How the weasel taught people to be grateful for what they are given. How a man and a buzzard exchanged bodies and what they learned from their horrible experience. How the hormigo tree, suffering from nostalgia—the illness borne of longing “to sing and release from its heart all the trills the birds had sung throughout its life”—is given the gift of music. 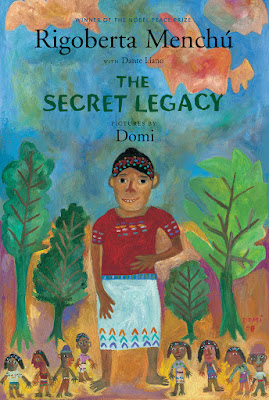 In The Secret Legacy, Seven-year-old Ixkem’s grandfather is 100 years old, and he is ready to pass on his legacy and knowledge. Of all the people in the village, Grandfather chooses his youngest granddaughter to be the new caretaker of the cornfields. “But I’m too little,” Ixkem protests. “Neither age nor size has anything to do with it,” her grandfather assures her.

Off they go together, the old man and the little girl, through the forest, to the cornfield, the “best place to scare off parakeets, blackbirds, wild boar, squirrels, turtle doves, the smallest of worms and moths and even a few invisible insects who wanted to eat the corn. Now it would be Ixkem’s job.” Her yelling and thumping reach the nahuales who live at the center of the earth. A committee of b’e’n (as the nahuales are called in K’iche’ language) brings Ixkem down to their underground turf, where she tells them about life on the surface and the amazing stories her grandfather told her.

Among them: How an arrogant, boastful lion learns a lesson in humility. How the futures of young children can be shaped by what is done to their umbilical cords. What makes good people good and bad people bad. How a hummingbird brings happiness into the world. About the miracle of falling in love and the requirement of a lengthy courtship. How happiness comes from a peaceful heart and the love that others know how to give. Why the light in our eyes is a reflection of those who love us.

In exchange for these stories, the b’e’n whisper a secret in Ixkem’s ear for her to take back to her grandfather. Now that he knows that Ixken will hold this secret legacy for the next hundred years and that the Mayan lineage will “live forever in the forests, in the jungles, in the mountains and on the coasts of Guatemala,” the grandfather happily closes his eyes.

When one considers the past and recent history of the Maya, Menchú’s children’s stories become even more poignant, and each story in each book has a significant message for children today. As Ixkem explains to the tiny b’e’n,

There are some bad people with lots of power….They declare war on others, they enslave their fellow man, and they don’t know how to share their wealth. Of course there are good people who fight for peace, set slaves free and give to others. The future of the world depends on these good people.

In The Girl from Chimel, there is a story of Rigoberta’s mother, who as a child fought off a pack of coyotes to rescue her pet pig. It was said that the whole village was awed by her courage.

Our elders said, “This is a good sign. She’ll grow up to be a brave woman who will survive many challenges. She should thank her nahuales and they in turn will give her strength and wisdom and will protect her memory forever. Her sons and daughters and grandchildren will all be courageous.”

If there’s a word to describe Rigoberta Menchú Tum and her mother and all the Maya who continue to struggle to maintain land, culture and community, that word would be “courageous.”

These three beautiful storybooks are about a happy little girl, secure in her world, with a “heart full of sunlight,” who, as an adult, wants for the world all that she had: “a mountain to protect me, a river to refresh me, birds to sing to me.” Both Rigoberta Menchú and her stories are an international treasure. Highly recommended.