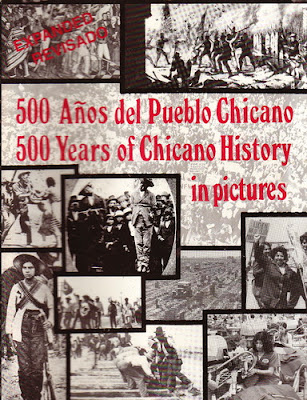 The hopeful poem that opens this book sets its tone:

Containing hundreds of photos, paintings, drawings, political cartoons, and text in Spanish and English about truths long denied, 500 Años is a huge photoessay, both a rare and valuable collection and a family album, about the Mestizo people in whom Indian blood runs strong, in whose blood runs the cry for freedom. There is much to celebrate, Martinez writes: the survival of the people and the resistance to exploitation, colonization and assimilation; the particular strength of Raza women in the face of discrimination and oppression; the great love, determination and fighting spirit of the elders; and the children who are the future.  The struggle for tierra, paz y libertad is to be celebrated, as Martinez writes, “as all of humanity’s great stories of struggle.” It’s a story still being written. 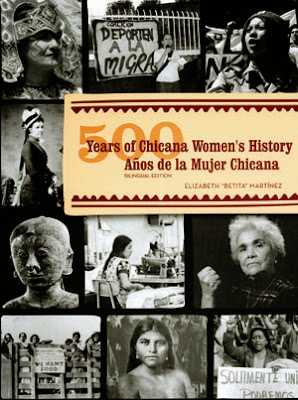 If one thing can be said of Betita Martinez in particular and Chicanas as a group, it’s this: They’re no wimps. And 500 Years of Chicana Women’s History/500 Años de la Mujer Chicana is proof. It’s a family photo album spanning more than 500 years, filled with some 700 photographs, drawings by Rini Templeton, political cartoons, newspaper clippings and short biographies, in Spanish and English, that highlight the histories and struggles of the women who now call themselves Chicana.

But here are also stories of the Native women who rebelled against colonialism: the Aztec women who “rained down darts and stones” on the invading Spaniards; Toypurina, who led a revolt against slave labor in the San Gabriel Mission; the women who led the 1692 “corn riot,” during which they burned down the viceroy’s palace and the mayor’s office. And stories of the Mexicanas who fought and died in the War of Independence and Mexicanas who came to the conquered northern territories, surviving a hard life, bringing with them the legacy of resistance.