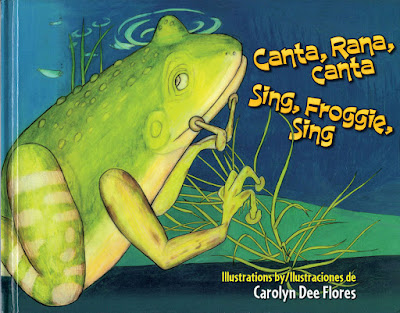 In a gentle, loving reworking of a traditional Mexican children’s song heard all over Latin America, an iconic, gesticulating Froggie gathers everyone together to sing. In Spanish followed by an English translation, the cumulative song begins with Froggie’s being hushed by a fly, who is hushed by a spider, who is hushed by a mouse; in each verse, a larger insect, animal—or human—arrives to hush the one before. But unlike the creepy and misogynistic “Old Lady Who Swallowed a Fly,” this song’s outcome is joyful and unifying.

The large, easy-to-read print is variously black or white, and back matter includes the full lyrics in Spanish and English, with guitar chords and a note about the song’s tradition.

Flores’s art—rendered on a cool palette of mostly Froggie-friendly “water” colors of aquas, greens and blues—uses Prismacolor pencil for intense pigment and core-opened Verithin pencil for smooth, delicate outlines. Her design, on large, double-page spreads, brings Froggie together with hyper-expressively drawn insects and animals balanced by photo-realistic impressions of Mamá, Papá, Abuela and Bebé. As Froggie appears on most of the illustrations, happily conducting the multi-species chorus of her opera, youngest listeners and singers will readily suspend any disbelief they may have had.

While I was momentarily annoyed at the spread in which Papá, holding a cell phone, is shushing Mamá while she’s singing to their crying Bebé, the next page made me laugh. Here, Papá, apparently having been handed Bebé—along with Mamá’s unseen and unspoken reply: “Pues, you take him!”—is spread out on a bench, fast asleep and loudly snoring, his arm draped around Bebé—and Abuela is shushing him up. (This adorable scene of both Papá and Bebé, wearing similar stylish khaki-and-blue outfits, while Abuela shushes and Rana happily snores nearby is, as a certain credit card adman intones—“priceless.”)

The other versions I’ve seen of this traditional song are unimaginative, not to mention mean, violent and ugly, and often contain stereotypical images of Mexican people. Here, Flores and Rosales-Yeomans have gifted us with a “new” tradition for our children: a fun cumulative song unified by an enthusiastic Froggie, surrounding herself with insects and animals, big and small—including humans—who just love to sing. On the next-to-last pages, Papá sings next to Mamá, who holds a newly awake, groggy Bebé, who watches as Froggie, sitting on a lily pad and joined by Abuela and the dog, calls out to everyone: “¡Comienza de nuevo!”

Youngest children will love this song’s quick-paced memory challenge, the race to identify the insects and animals, and even a quick “¿Dónde está Ranita?” But besides the fun and perhaps more importantly, Flores, Rosales-Yeomans and Arte Público have given us mirrors in which Raza children and families can see themselves in community and in the world. Canta, Rana, Canta / Sing, Froggie, Sing is highly recommended.