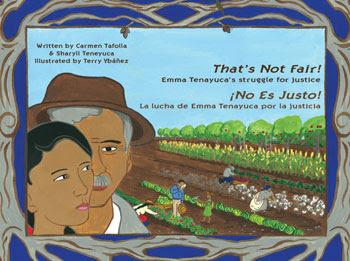 Born in 1916 in San Antonio and raised by her grandparents, Emma Tenayuca was an activist since childhood. Her grandfather, who read newspapers with her and took her to rallies that confronted issues of poverty and hunger, fed the young girl’s own hunger for learning and social justice. By the time she was 16, young Emma had already been jailed several times. “I never thought in terms of fear,” she later said, “I thought in terms of justice.” A brilliant orator, activist and educator at a time when Mexican and Mexican American women were not expected to speak out, Emma became known as “La Pasionaria,” and took on one battle after another. In 1938, Emma was asked to lead the strike of some 12,000 pecan shellers, most of them Mexican women; and in fewer than two months, they forced the factory owners to raise their pay. This historic victory was the first significant win for Mexican American workers in the struggle for political and economic justice.

Co-authored by Emma’s friend, Carmen Tafolla; and her niece, Sharyll Tenayuca, That’s Not Fair! is a coming-of-age story of a child who is moved to action by the poverty and injustice she witnesses all around her. Such as hard-working people denied their pay. Such as hungry children subsisting on a few pecans, dropped from a tree. Such as migrant farm worker children denied an education. At first, young Emma gives her apple to a hungry boy and her new sweater to a thin, shivering mother and baby, and begins to teach a girl how to read. But she soon realizes, as she sobs to her grandfather: It’s not fair!

How Emma the child, learning from her gentle grandfather, matured into Emma the organizer who led the mostly Mexican, mostly women pecan shellers (nuceras)—who “worked so many hours that they were coughing and sick, and still they did not earn enough to feed their children” while factory owners “had so much money they would throw away…food that the workers wished they could give their children”—is a story that will resonate with young children.

Tafolla’s idiomatic Spanish translation reads smoothly and works, both orally and in print, for hablantes; and an afterword that contains photographs of Emma Tenayuca and biographical information completes the story.

Ybáñez’s full-bleed double-spread illustrations, rendered in watercolor and pen-and-ink on a palette of bold, flat colors with bright highlights, are reminiscent of traditional Mexican murals. While Emma’s red sweater on almost every page focuses the reader’s attention on the subject, the pecan trees and branches that frame each illustration focus the reader’s attention on the issue. I especially like that, while the people’s faces are generally stylized, their complexions are realistically varied.

While the reading level for this excellent story might begin at about third or fourth grade, younger children will be drawn in as well. I’d like to see a copy of Emma Tenayuca’s inspiring story gifted to all refugee children being held in the border-town detention facilities. An important book about a child’s confronting injustice and growing up to make a difference, That’s Not Fair! Emma Tenayuca’s struggle for justice / ¡No Es Justo! La lucha de Emma Tenayuca por la justicia is highly recommended.