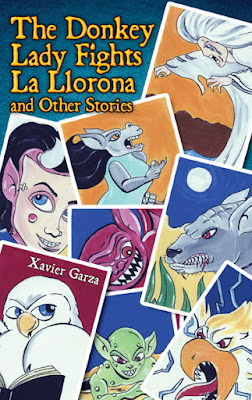 In the title story, an incredulous Margarito tries to escape the notorious rudas, Donkey Lady and La Llorona, who battle each other to claim him as her next victim. In “Holes” (“Hoyos”), a heroic, hole-digging dog helps Joe to defeat an invasion of green-skinned, red-eyed, havoc-wreaking duendes. In “Tunnels” (“Túnales”), another Joe witnesses a crime-fighting Chupacabras putting an end to a murderous team of narcotraficantes in a border-town cave. In “The Gift That Is a Curse” (“El don maldición”), Trino’s super-protective sister isn’t afraid to use her supernatural, super-gory ability to dispose of her brother’s nemesis.

What makes these gruesome stories particularly engaging for middle-school readers is their “first-person-terrified” narrative:

Instantly I am reminded of the stories Grandma Maya told me back when I was a child, about a creature she called the Blood-Sucking Beast. Why any grandmother would think it wise to fill a child’s brain with stories of a vicious green-skinned monster that preys upon unsuspecting victims by draining every single drop of blood in their bodies is a mystery to me. But she always said the Blood-Sucking Beast was real. That it stood as tall as a full-grown man and had razor-like claws that were as sharp as brand-new steak knives, like those ones you see on TV. I hear a hissing sound behind my back. Slowly, I turn to find myself face to face with the very creature from my grandma’s stories. Its glowing red eyes stare into mine. I want to run, I really do. But with every step the creature takes, I find it harder and harder to move. It’s as if the creature’s red eyes have some kind of mind control power over me that keeps me from running. The creature gets closer and closer until it is so close that the drool dripping from the monster’s mouth falls on my sneakers.

Garza’s full-color cover, in brightly toned acrylic on paper, shows several of the creatures our young protagonists will encounter; and interspersed in each chapter with bold, black-and-white art, rendered in pen-and-ink and brush, is a visually scary reminder to readers: Be afraid, be very afraid.

These Twilight Zone-creepy stories will appeal to bilingual readers who can read each one in Spanish and in English, hablantes who are learning to read English, English speakers who are learning to read Spanish, and high-energy reluctant readers in either language. For all children who love to be scared in a safe place, The Donkey Lady Fights La Llorona and Other Stories / La señora Asno se enfrenta a la Llorona y otros cuentos is highly recommended.