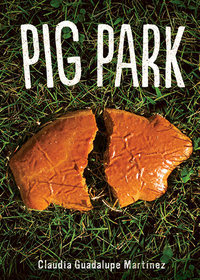 Martínez’s Pig Park is a contemporary novel that depicts with affection and a light touch a bustling, though little-known, neighborhood in Chicago and an unholy alliance between business interests and politicians. Ever since the American Lard Company closed in 15-year-old Masi Burciaga’s Pig Park neighborhood of Chicago, times have been tough for the local businesses tucked behind the plant. Masi’s father and grandmother started Burciaga’s Bakery when they came to Chicago from Mexico some 30 years earlier, but now the bakery is losing money. The local councilman, though, has an idea. He has been in contact with a New Mexico businessman, and if all the local businesses can contribute a sizable sum, the businessman will build a Mayan-style pyramid—“La Gran Pirámide”—in Pig Park to attract tourists.

Overlooking the stereotypes implied in this local “attraction,” Pig Park’s business owners sign on, and construction begins. Masi wants to work outside, but she and the other girls are stuck indoors doing clerical work. Although she has imagined a romantic relationship with her best friend’s older brother, she’s also drawn to the mysterious teenage intern who arrives from New Mexico to help. Her mother, who is ill with diabetes, leaves because the stress is too much. Masi misses her mother, as does her father, and they strategize in their own ways to get her back.

But as “La Gran Pirámide” is built and the community’s money runs out, the schemers want more. Here, Loretta, Masi’s mother’s best friend, voices her suspicions to the community:

“I already put in every last cent I had left on this,” Loretta said. “Besides, we don’t celebrate Cinco de Mayo. That’s just for people who like to get drunk. Don’t get me started on Day of the Dead. It’s disrespectful to try to make money off of our dead. And where are we supposed to get all of these ‘historical’ artifacts? Are we supposed to make people think they’re real? Are we building a museum now? I just stood here with my mouth shut last time because we are all so desperate, but not this time.”

As individuals and families begin to realize that they’ve been had, they also realize that something must be done. As narrator, Masi is an engaging and resourceful protagonist who wants to do right by her family and community, and sometimes voices what everyone is feeling.

Through Masi’s narration, Martínez shows, rather than tells, how Spanish language is used in a community that is largely bilingual; and since Masi has grown up working in her family’s bakery, her descriptions of people and places often contain food similes and metaphors.

Readers will be caught up in Masi’s story, wondering if and hoping that her mom will return and the bakery and the other local businesses will survive. Things look particularly bleak when Masi finds out that other places that hired the New Mexican businessmen ended up worse off than when they started—and that the beneficiaries of their pain turned out to be outside investors tight with the local politicians. Eventually, Masi prevails on the intern, her father, and the community to take matters into their own hands. A fast-moving page-turner, Pig Park is an excellent example of how young people, through creative action, really can bring about personal and political change. It’s highly recommended.