Somos como las nubes / We Are Like the Clouds 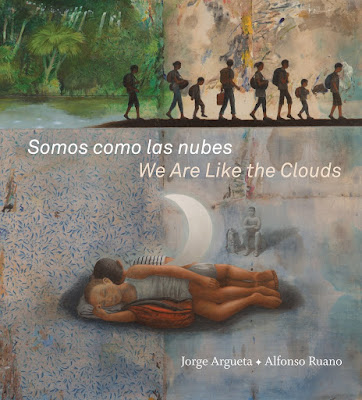 Even before the Monroe Doctrine, which declared that all of the Americas belonged to the US, this country has wreaked havoc through invasion, setting up companies to put native products in the hands of American corporations, and creating and supporting regime change to fit the agenda of big business, all of which have resulted in political and economic destabilization. What ensued is mass unemployment, social chaos, and the terror of government death squads and the murderous narcotraficante gangs. As of now, few holdouts remain—among them, Cuba, Venezuela, Bolivia, Ecuador, and Nicaragua. Meanwhile, refugees from the most dangerous of the US “client” countries—such as El Salvador, Honduras, Guatemala and Mexico—have fled by the hundreds of thousands into the US. They are not coming here for a “better life”—they are fleeing to save their lives. And they flee, as a colleague aptly described, “into the mouth of the shark.”

In Somos como las nubes / We Are Like the Clouds, poet and storyteller Jorge Tetl Argueta—himself a refugee from the 12-year war following the US-sponsored military coup in El Salvador—writes from the perspectives of the frightened children caught up in the horrific  aftermaths of these wars of conquest, understanding only what they see around them, yet still with large hopes and limited choices. Argueta told me that, as a Salvadoran man, he “can’t do anything else but talk about this great injustice; to be the voice of the voiceless children, whose hearts, minds, souls, and spirits have to endure such sadness in their young lives.”

Argueta’s evocative free verse in Spanish and English communicates to young readers the dreams, fears, and hopes of the refugee children who have been forced to leave everything—and sometimes everyone—they know, to get to a temporary place of safety where strangers will decide their fates. Some will be reunited with their parents or other relatives. Many will not. But for now, they are safe.

Accompanied by paid “coyotes” who guide them—the children, carrying only backpacks and jugs of water, sometimes with a parent, most times only with each other—take the perilous journey for hundreds of miles through the desert, cram themselves onto the top of “La Bestia” (the train they call “the beast”), encounter the Border Patrol, and pray to El Santo Toribio, saint of the immigrants, to be shown the way:

Ruano’s acrylic on canvas paintings beautifully show, rather than tell, the children’s emotions. Here is a young child, covering his ears, not wanting to hear the voice of a gangster. Here, in the background, are tiny figures of a family, leaving their neighborhood, in which there is a whistling dog, a dancing cat, and a rooster looking in the mirror. Here are the scary, expressionless, one-eyed, tattooed gangsters, one holding a machete. Here are lots and lots of children, seen from the back, beginning their dangerous trek, some holding the hands of even younger children. Here is a little boy, in the desert, riding on his father’s shoulders. And here are perhaps hundreds of children, piled onto the top of “La Bestia.” Of all of them, only two children in the foreground are looking directly at the reader.

Finally, for these children, there is shelter. A mother tells her child in his dream: “This is not a dream. You are in my arms.” And in Los Angeles—the City of Angels, where the children will stay, for now—there are paletas, fruit popsicles in every color and shape:

In the end, “Somos como las nubes”—the simile, becomes “Somos las nubes”—the metaphor. We are the clouds. We will reunite with our families. We will get through this. Nothing and no one can stop us. A strong message of hope for lost, lonely, terrified young children. An important and gorgeous book, Somos como las nubes / We Are Like the Clouds is highly recommended. It’s my hope that Groundwood will donate a copy to every Spanish-speaking child in every refugee center in el norte.