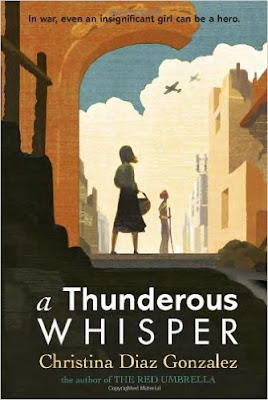 Díaz González’s second novel mines her rich family history originating in the Basque region of Spain, specifically the experiences of her grandparents and great-grandparents who came to the Americas following the Spanish Civil War. Drawing from their lives and culture, she weaves an original and powerful story of a 12-year-old girl caught up in this war, which began with General Francisco Franco’s invasion of the Spanish Republic from Morocco with the help of Hitler and Mussolini in 1936. While the war continued until Franco’s victory in 1939, the novel culminates with the bombing in 1937 of the Basque city of Guernica by Nazi forces allied with Franco’s Nationalist (fascist) army.

Anetxu (Ani) lives on the outskirts of Guernica. Her classmates call her “Sardine Girl” and bully her relentlessly because she is poor and smells of the fish that she and her mother sell in the marketplace and deliver door to door.

My father would say our family’s clothes carried the scent of the sea, but that was just his fancy way of saying that we reeked of fish. It made sense since Papá had worked as a merchant seaman before joining the army and Mamá had always been a sardinera, selling the sardines that were the size of my feet, but stinkier… No wonder everything they owned, including me, smelled of fish.
At home, things aren’t much better. Her mother still mourns the death of Ani’s brother from illness years earlier. Ani endures both physical and emotional abuse from a mother who won’t call her by her given name but merely “neska”—the word for “girl” in the Basque language—and she misses her father, who has volunteered to fight against the fascists.

One afternoon, while sitting under her favorite tree outside the city, Ani sees a slightly older boy with a limp. She has never seen him before, and she learns that he has recently moved to Guernica because his father manages movie theaters for a large company. Mathias’s father is of Basque heritage, and his mother is a German Jew; for that reason, he too supports the anti-fascist cause. After some mutual distrust, Ani and Mathias become friends. He brings her to his father’s theater, where they eavesdrop on his father and other community leaders who have become spies. Soon, the children are carrying messages to the anti-fascist resistance about the location of Franco’s ground forces and Hitler’s planes and ships. However, they are unable to protect their city against the devastating bombing that destroys Guernica and kills hundreds of residents.

Many young people learn about Guernica from the famous anti-war painting by Pablo Picasso. Díaz González’s novel portrays the people in a way that contributes greatly to our understanding of the painting, of the war that has widely been seen as an Axis testing ground for the Second World War, and of the lives of children living in a war zone. The author realistically depicts life on the home front and the longing of many children to become part of the fight and to “make a difference” with little understanding of the true costs and horrors of war. A Thunderous Whisper is highly recommended.