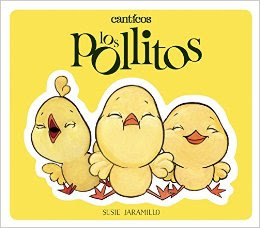 Conceived for the youngest hablantes, and bilingual and non-Spanish speakers as well—these whimsical, engaging and impossibly adorable accordion-styled board books are too heavy for toddlers to chew up or throw across the room. Which they wouldn’t want to do, anyway. For everyone else, they are an artful, well thought-out and beautifully produced treasure, keepers for sure.
Jaramillo creates her art by first sketching in pencil, then painting with acrylics to bring out the characters’ textures and “plumpness,” and finally, overlaying with black ink to bring them to life. Each librito has its own bright palette that highlights one color: yellow for Pollitos, for instance, and gray for Elefantitos. Printed on smooth, heavyweight paper, each page contains a partially hidden pull tab or flap that adds surprise, life and motion to the characters. It’s an art style that’s both interesting and fun for the littlest kids for whom Jaramillo produces them. Her goal, she told me, is to create bright, fun, “cute little characters that kids fall in love with and want to hug.”

The rhymes—something not often seen in children’s books—are conceived in Spanish and interpreted rather than translated into English. Rhyming in Spanish and English, they roll off the tongue and capture the melody, spirit, and sense of humor of both languages, engaging hablantes and non-Spanish speakers alike. In addition, they carry a subtle message—not that everyone’s the same, but that everyone’s different and they all get along. 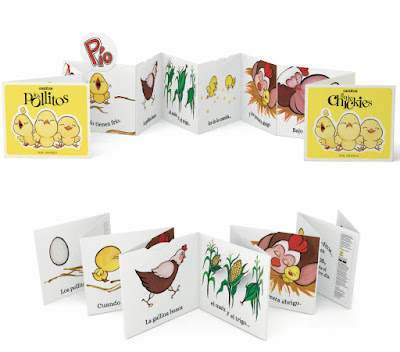 
And the English interpretation, “Little Chickies”:

Little chickies squeal
¡pío! ¡pío! ¡pío!
When they get so cold…
and when they want a meal.
Mama goes and gets them
corn, from the field…
serves them each their food…
and warms them head to heel.
Chickies sleep so yummy…
snuggled up with mummy…
And that’s just where they’ll stay,
until another day. 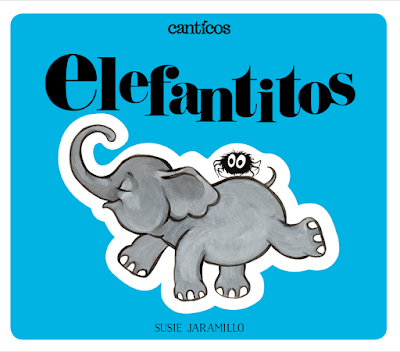 is interpreted into an English version:

One little elephant balanced oh so elegant
right on the web of a spider.
Along came a friend from around the bend
and the elephant called to invite her.

One of the differences in Jaramillo’s version as opposed to the “traditional” one, is that the elefantitos are babies who have a lot to learn. Maybe. As the group grows in number, the first one's expression —then that of the second, third, fourth and fifth—grow from carefree to concern to a sense of imminent danger as they start to think that balancing on a spider’s web might not be such a great idea. And the little spider—whom Jaramillo portrays as a big-eyed black ball of fuzz—is becoming frantic as well. Since no one gets hurt here, kids can happily repeat the song until they get sleepy. Or the adults do.

Frustrated with the lack of beautiful, high-quality bilingual books that, as Jaramillo told me, “tell stories inspired by our cultures, in a simple format that’s accessible to very young children,” her family joined with another to found Encantos Media Studios. It’s a homemade small business, a public benefit corporation with a social mission, as Jaramillo told me, “to bring people together, to tell stories inspired by our cultures.” As a sustainable business that is also a force for good, Jaramillo says that Encantos gives away “lots and lots of books to the communities we serve. It’s a complete labor of love.”


“It’s so important,” Jaramillo says, “to impart to kids both language and culture so that they can be proud of their families and bond with their grandparents.”

Each accordion shaped book in the Cantícos series comes in a sturdy box for added protection, and there’s a free app, so the littlest ones can sing along. These absolutely adorable, good-natured, hilarious, and virtually indestructible (except for the pull tabs and flaps) little-kid books—in Spanish and English—are highly recommended.