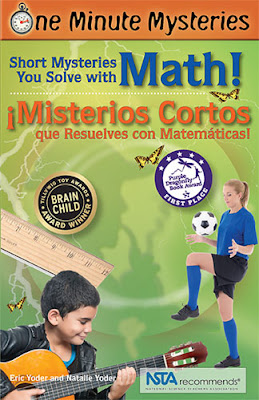 This fifth volume in the Yoders’ One Minute Mysteries series, and the second in both Spanish and English, is the sister book to the science mysteries titles. As the publisher, Dia Michels, wrote to me, “Doing a bilingual math book brought with it a whole new set of challenges.”

The original project began as a series of father-and-daughter activities in which one wrote and the other edited, or both wrote together. Eric’s vision was, as he writes in his part of this foreword, to “show real-world applications of academic subject matter, using mystery as the vehicle,” and Natalie’s vision was to be able to figure out “everyday problems that could be solved using math.” Together, their aim was to make math more accessible and enjoyable.

As with the science volumes, these challenging problems open up both discoveries and potential for curious, inquisitive minds. And that these 40 pint-sized “mysteries”—covering Math at Home, Math Outside, Math at Play, and Math Every Day, and including a Science Bonus Section—are presented as encountered and solved by children themselves, actually make math both approachable and fun.

As with the science volumes, the book design here is clear and the text is readable, without illustrations or clues to detract from each “mystery.” The problems are presented in English on the left and Spanish on the right and generally headed by puns in each language to grab attention. The images—black-and-white photos and drawings—are appropriately reserved for the “solution” pages: those on each two-page spread are related to each other so young readers can intuit more than one connection between image and solution.

Among my favorite brain-teasers is “Pancake Mix-Up,” in which Meg has to figure out exactly how many single-serve packages of pancake mix to combine with milk, using several different kinds of measuring cups. All she had to do, she says, was to find the smallest number that was a multiple of both ounces of pancake mix and ounces marked on the measuring cups. As someone who’s math-challenged, to say the least, my solution would have been to make scrambled eggs.

But my hands-down favorite, probably because I was able to figure it out, is “Ice Cream, Anyone?” in which 21 energetic middle-school girls, celebrating the end of their field hockey season, visit Cora’s Ice Cream Parlor and request that each them get two different flavors of ice cream—and that each get something different from anyone else. But Cora has only 12 flavors.

Villalobos's colloquial Spanish translation reads well, and this layout of the mysteries and solutions enable hablantes, bilingual students, and English-only speakers to work in the language in which they’re most proficient, and look to the other side for corresponding words, phrases, and idioms that particularly interest them. And his puns are hilarious; for instance, his version of “Pancake Mix-Up” is “Manos en la Masa.” For those who don’t know, the interpretation would be “caught you with your hands in the cookie jar,” which, of course, has nothing to do with this math problem. I’m betting that it’ll cause both hablantes and bilingual kids to laugh out loud.

While it’s obvious that the authors used great care in choosing the photos of both children and adults who represent a diversity of age, ethnicity, and gender, I would like to have seen a representation of children and adults with disabilities and the spectrum of family configurations as well.

Also missing was a diversity of income levels. The problems feature predominantly middle- to upper-income families taking private golf lessons, staying at a dude ranch (in which they’re required to take part in the daily chores), or figuring out which kind of new car to purchase. One problem that was particularly problematic for me was this one:

Jada and Michelle’s school was closed for a winter teacher training day, so their parents decided to take a day off from work to take the family skiing. They were glad to see when they got there that there were no lines at the chair lifts.

With those suggested changes in mind, One Minute Mysteries: Short Mysteries You Solve with Math! / Misterios de un minuto:¡Misterios cortos que resuelves con matemáticas! is engaging and fun for math nerds (and their parents, if permitted), as well as youngsters who could benefit from some time away from video games. It’s recommended.