Here, Domínguez brings 19th-Century American schoolteacher, Sarah Josepha Hale’s nursery rhyme, “Mary Had a Little Lamb,” into modern-day Peru, where “Mary” becomes “María” and her faithful lamb is a llamita. Beautifully and conscientiously executed in intention, art and translation, María Had a Little Llama / María Tenía una Llamita is a picture book that “shows” rather than “tells” a particular child’s world that in some ways is the same as, and in other ways is different from, those of children who may be reading it.

María is an Inca-Peruvian girl who loves her pet llama and her pet llama loves her—so much so that, while the other llamas (and a few sheep as well) trot off the other way, Maria’s llamita follows her to school. The children are amused of course, but her beloved llama has to wait patiently outside (rules, you know), while the teacher explains the close relationship between the girl and her pet.

While the English text follows Hale’s original poem word for word, Domínguez’s Spanish translation is conversational and charming, and keeps a rhythm that will appeal to hablantes and young bilingual readers as well.

Effectively employing mixed media consisting of watercolor, gouache, inks and colored pencil on an earthy palette, Domínguez reserves the more opaque inks and gouaches to center María and her bright red hat—as well as her solid white llama—while using the flatter watercolors for the backgrounds. This works especially well, for instance, in depicting the vast blue-green Andes mountains on all of the spreads that show the land.

Domînguez presents physical and cultural details in a subtle, organic way. As an Inca-Peruvian child, Marîa’s traditional outfit consists of a plain woolen poncho and skirt, a bright red chullo (a woolen cone-shaped hat with earflaps), and a pair of ojotas (sandals made from recycled tires). On her way to school, she also carries a bright purple cloth bookbag on her back. In the classroom, María’s teacher wears a traditional embroidered Quecha jobona (wool jacket) and montera (basket-hat). She also wears eyeglasses. On her desk are a stack of books and a globe, while the children sit at desks and write on paper with pencils. While these are important visual cues for young readers in the US to absorb, Domínguez’s illustrations do not depict cultural anomalies. Rather, they show an everyday mix of old and new in a rural Peruvian village.

Domínguez’s careful attention to detail shows throughout. Here are children and adults in a mixed-grade classroom who vary in age, dress and complexion tones. Here is María’s home village, with tile-roofed houses and an open-air marketplace. Here are the animals—llamas and sheep, free and corralled—of different sizes, shapes and colors. Here is a group of musicians in the background, who vary in ethnicity, gender and body types.

Some of my favorite illustrations:

María’s llama is patiently waiting outside—“But still he waited near and lingered patiently about” / “Pero ella se quedó cerca esperando pacientemente…”—sitting on the grass, ever smiling as llamas do, while clocks float in the background to mark the slow passage of time.

Domínguez depicts “everywhere” (“And everywhere that María went, the llama was sure to go” / “Y a donde María iba, la llama la seguía”) as a roughly drawn map of Peru that focuses on the Inca Trail: the Andes, Cuzco, the rivers and the sacred Machu Picchu. This spread spans the top half, while the bottom half shows María and her llamita, always together. This is María’s world. This is everywhere.

The final spread opens to a scene of llamas looking on from inside a corral as musicians play traditional musical instruments, which include quena (flute), guitarrón, and arpa indígena (harp); and children, with smaller instruments, wave. In the background are the Andes and forefronted is María, playing her zampoña (pan pipe) and dancing, her llamita dancing beside her. Some of the children are wearing contemporary clothing and some are dressed traditionally; their hairstyles as well reflect their ethnic and cultural mixes. Everyone is smiling, llamas included. It’s a scene of pure joy, one to which young readers will keep returning. 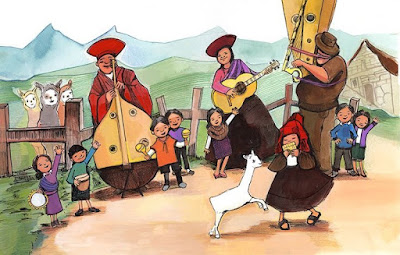