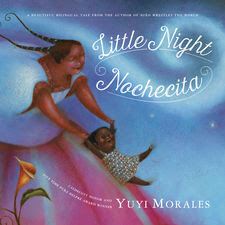 In this beautiful inverted go-to-bed story, full of magical realism and lots of love, Mamá Cielo (Mother Sky) convinces her young daughter, Nochecita (Little Night) to come out and darken the sky so that everyone can sleep. While Morales portrays Mamá Cielo as a beautiful, zaftig Mestiza with long braids flying, Nochecita is a chubby baby girl with glowing, dark, dark skin, happy and mischievous and adorable and well-loved. She is, after all, the night, so how could she be anything but dark?

This was Morales’s intention, she told me: to acknowledge and honor the beauty of brown skin by having a child represent the night. As such, while Little Night / Nochecita has the energy of a bedtime story, it’s as calming as the relationship between a loving mother and her child. And, as Morales told me, it celebrates her memories of her mother’s getting her and her sisters ready for bed, and how her sisters would run and hide in order to avoid going to sleep.

Here, it’s time to come out—rather than time to go to bed—and Nochecita’s running around, one more time, trying to avoid darkening the sky because playing hide and seek is the fun thing to do. While Morales plays with this cosmic idea, Nochecita peeks from behind the hills, disappears into a bat cave, jumps into a rabbit hole, blends with the stripes of bees, vanishes into a blueberry field, and goes anywhere dark, as dark as she is.

Morales produced her acrylic art on paper with very light brush strokes, thinly layered and without mixing of any of the colors. By drying each layer with a hair dryer before adding another, she told me, she was able to form her colors by creating a myriad of layers. The result is a richly dark palette—of mostly twilight colors of reds and pinks, blues and purples, with brown tones representing the Earth and, of course, Nochecita and Mamá—that literally glows, with the depth of the shine depending on the depth of the dark. And, as young readers turn the full-bleed spreads, they see the images and colors of the afternoon becoming night.

Both Spanish and English are poetry, and neither is an exact translation of the other. They both hold the metaphors of the language and beautifully complement the artwork. For instance, as Mamá pours stars from the Milky Way from an enormous clay jug into a tiny cup for Nochecita, the English reads:

“I found you. I found my Little Night.” Creamy mustache, lips lick, stars dripping from the Milky Way to drink. 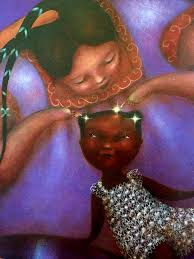 Finally, as the sun is setting and the last peekaboo for this day has occurred, Nochecita has quit her hiding game. She’s taken her bath in a tub of falling stars, she’s wearing her nightdress crocheted from clouds, she’s had her nighttime snack from the Milky Way, and she’s allowed Mamá to comb her hair with her braids kept in place by three hairpins—Venus está al Este, Mercurio, al Oeste, y Júpiter, arriba. And as the little children for whom this story was made are in bed, getting sleepy, Nochecita is taking her moon ball and bouncing it high into the air.

On every page, with every word, darkness is beauty and joy. Little Night / Nochecita—a loving, life-affirming story that celebrates children who see themselves in this little girl—is highly, highly recommended.