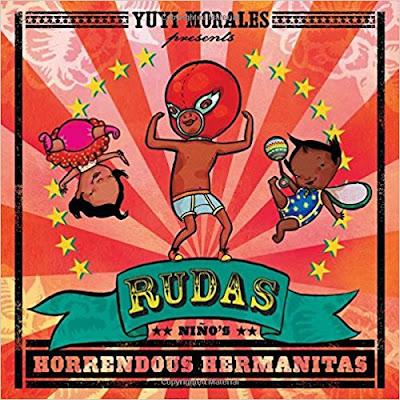 For the most part, adults who are fans of Lucha Libre Mexicana, professional wrestling bouts in which the Técnicos (the good guys) and the Rudos (the bad guys) enact the battles between good and evil, are aware of the political and social realities they signify. Some of it may fly over the heads of children, but Lucha Libre, “el fuego en el cuadrilátero,” remains a pop-culture phenomenon, similar to WWF, in Latino neighborhoods, north and south.

Readers may remember (from Niño Wrestles the World) how our three-year-old, world champion lucha libre Técnicito, decked out in red mask, orange and yellow sneakers, and blue-banded tighty whities, quickly demolishes the nasty Rudos in his little world: “La Momía de Guanajuato” (the Guanajuato mummy, who has been chasing people since 1865), “La Cabeza Olmeca” (the mysterious Olmec Head), “La Llorona” (the shrieking Mexican ghost who abducts children to replace her own), “El Extraterrestre” (who hovers the earth in his flying saucer), and “El Chamuco” (the devil who tempts little kids into doing bad things). Finally, he is challenged by the worst, the loudest, the most dangerous Ruditas of them all: the tag-team “Las Hermanitas,” his twin baby sisters, who have just awoken from their nap! And The Great Niño, employing his masterful brain, rather than his so-so brawn, emerges once again, victorious!

In this, the rematch of all rematches!—defeated, but unwilling to surrender!—Niño’s HORRIFYING, HARROWING, HORRENDOUS HERMANITAS (“Wrestling champions! Lucha Queens!”)—interrupting their brother who has been busy creating a picture book and must now drop everything to don his lucha libre costume—return to take back the title (or something)! But this time, decked out in cute little sparkly onesies with angelic, kewpie-doll expressions, they’ve decided to employ the dirtiest, smelliest, most vicious, rudest tricks that Ruditas can possibly pull off on the other Rudos. De veras, ¡es fuego en el cuadrilátero! Their POOPY BOMB BLOWOUT—“such a rotten move!” quickly sends El Extraterrestre back home! Next, their NAPPY FREEDOM BREAK stuns Cabeza Olmeca! And their next hideous move, TAG TEAM TEETHING, crunches El Chamuco’s tail! After their PAMPERED PLUNDER, in which they steal La Llorona’s baby dolls, Niño pulls the unbelievable LOOK-AND-BOOK DIVERSION (with the book he’s made, aptly entitled RUDAS), but the hermanitas are inconsolable, HORRIBLE losers—until they (with Niño’s allowing it to happen) pull off a SEIZE AND SQUEEZE—and they’ve won (sort of)! The fight is over! Will Niño demand another rematch? 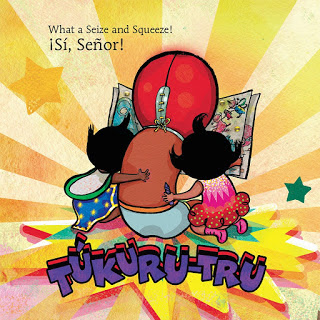 In her hilarious and beautifully crafted picture book, Morales digitally collaged her artwork, loading each double-page spread with bright, bold acrylic paint rolled on paper and textured with handmade stamps and salt on watered acrylic (to create the rock-like texture for la Cabeza Olmeca). She also painted the black lines of the characters with ink and brush and used crayons in a few places. The ample white background highlights brilliantly arranged bold font styles and speech bubbles (for comic-book sound effects), and multicolored stars, zigzags and other shapes—and title cards that mimic the expressive and fun Mexican Lucha Libre posters.

Youngest children, turning the pages and listening to creative readers, will see and hear the lucha libre announcers shouting their over-the-top superlatives: “The time has come to welcome the PHENOMENAL, SPECTACULAR, LEGENDARY (TWO) OF A KIND…”

In Rudas: Niño’s Horrendous Hermanitas, as well as Niño Wrestles the World and all of Morales’s other stories, she makes sure to depict the racial mixture, even within families, that shows the kind of diversity found all over Latin America. In both titles, one of the hermanitas is dark-complected, one is light, and Niño is kind of in the middle. And master storyteller that she is, Morales seamlessly incorporates Spanish words and phrases into the sparse English text without interrupting the story by translating them, so young hablantes and English-speakers can enjoy the action together. (Readers can peek at the translations and small illustrations on the endpapers.)