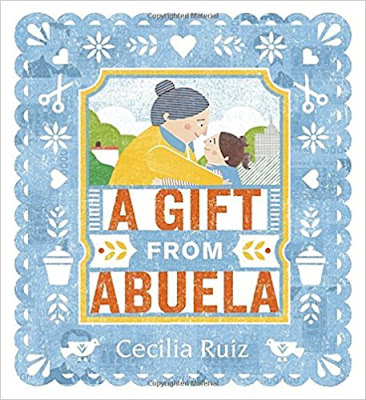 On the cover is a scene of an elder and child, with the Mexican countryside in the background. The two are embracing and smiling at each other. The scene is framed by a papel picado with non-traditional designs, including scissors. A close look reveals that the papel picado has been cut from an old Mexican peso.1

In December 1994, just a few months after NAFTA took effect, the Mexican economy tanked as the government devalued the peso against the US dollar. The peso suddenly became worthless, which sent inflation soaring and set off a severe recession, causing widespread unemployment and poverty among the Mexican people.

This is the hinted-at backstory for Ruiz’s gentle, loving tale that focuses on Abuela and Niña, and how, through the years, they spend time together in Mexico City. In the first image of the two, Abuela sits in a rocking chair, holding the sleeping, swaddled Niñita on her lap. The next page—one of my favorites—depicts several stages in their lives together: Abuela with Niñita in a bib and onesies, dancing together; Abuela with Niñita as a toddler, spinning around; and Abuela teaching an older Niña how to make papel picado. Meanwhile, Abuela is putting away some pesos each payday to surprise Niña with a special gift.

Ruiz’s art is a combination of traditional printmaking and digital work. First, she told me, she carves all the shapes and textures within each image into rubber, and prints them with black ink. She then scans all the images and composes and colors them in Photoshop. The pleasing result here is a gently textured design on a light pastel palette of mostly gray-blues and golds, with some greens, browns and red-oranges for accent, and lots of white space. I especially like that, while the images may appear simple at first glance, they contain lots of symbolism and the faces portray the varied ethnicities of the Mexican people.

Abuela and Niña are getting older, of course, and their country is changing as well. In one illustration, Abuela and her granddaughter are bringing their groceries home. In the background are a butcher shop (“Carnicería ‘El Chato’”) and a gift shop (“Miscelánea ‘La Macarena’”). The workers, as well as bus passengers, are waving. And Niña is clowning around while Abuela laughs. “But their favorite thing of all,” Ruiz writes, “was a much simpler one. Every Sunday, they would sit quietly in the park, eat pan dulce, and watch the people pass by.”

A spread a few pages over shows the economy’s getting difficult: both stores have been gated shut, and the owner of the small restaurant next door sadly waits for customers. And Abuela’s pockets are empty.

As the recession worsens, Ruiz symbolizes its terrible effect in three almost exact images of a Mestizo pan dulce vendor in the park. In the first, he’s calmly standing behind his wagon, waiting for customers to come along. The sign painted on his wagon says, “Pan Dulce, 10 pesos.” In the second image, the vendor is gesturing apologetically to Niña that the price has increased to 100 pesos, and what she’s holding out is not enough. And in the third, the price has again increased—to 1,000 pesos—and, while there are several people standing around, the vendor is calling out and no one is responding.

The recession also forces Abuela to “work twice as much,” which tires her out. And Niña begins to hang out with her friends more. “Sometimes life just gets in the way,” Ruiz writes. One day, as she plans to surprise Abuela by cleaning house for her, Niña discovers Abuela’s cache of now-worthless pesos. And together, Abuela and Niña create something out of nothing—they transform the pieces of paper into beautiful papel picado.

The papel picado have become a gift from—and to—Abuela.

With lovely illustrations that complement an economy of words, Ruiz’s semi-autobiographical tale is a gift to younger listeners as well as older readers who might enjoy looking at the art and deconstructing symbols. Attention, Candlewick: Please publish this story in a Spanish edition as well. A Gift from Abuela is highly recommended.

—Beverly Slapin
(published 4/13/18)
1 Making papel picado is a traditional Mexican art that’s been passed from generation to generation. These beautiful, delicate cut-outs, usually created from colored tissue paper, are generally made in stacks and, over time, the tool used has changed from scissors to chisels to allow for greater precision in the detailing. In teaching children to construct papel picado, however, scissors are generally used.↩