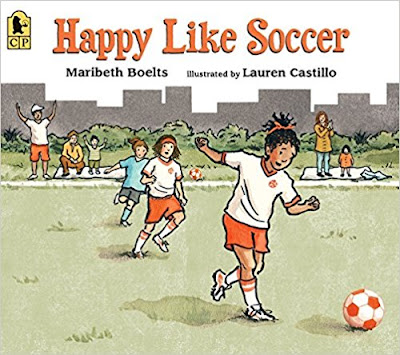 The game of soccer, also known as fútbol, is played all over the world, both professionally and just for fun. Anywhere there are patches of space—sometimes even in war zones—one can find children playing soccer. (One of my favorite middle-grade books is A Little Piece of Ground by Elizabeth Laird. In Ramallah, occupied Palestine, a boy risks his life to get out and play soccer with his friend.)

Here, Sierra, our young Latina narrator, has been chosen to join a new (white, middle-class) suburban girls’ soccer team. Comparing her regulation uniform and equipment and this pristine soccer field with the deficits of her own neighborhood (including that anyone who shows up can play), she says,

My shoes have flames and my ball spins
on this spread-out sea of grass with no weeds,
fields with no holes, and real goals,
not two garbage cans shoved together
like in the lot by my apartment,
where soccer means
any kid who shows up can play.

Sierra is a stranger in this new place; although everyone cheers for her, no one knows her name. She lives with her auntie in an ethnically-mixed urban neighborhood, where “no buses run.” Auntie works at Café Garcia, and is unable to attend her niece’s games. So, Sierra says, while “nothing makes me happy like soccer… nothing makes me sad like soccer, too.” One Saturday, when her auntie is finally able to take the day off and join her niece—the game is rained out.

So, convinced that her “auntie’s boss won’t do two favors right in a row,” Sierra convinces herself to ask her soccer coach if it would be possible to move the game to her neighborhood—just once and on a Monday—so her auntie could attend. Coach Marco—who, besides Sierra and her auntie, appears to be the only other brown person in the story—pulls it off. And in this game, Sierra is cheered on by people who know her name.

Castillo’s illustrations, in ink and watercolor with acetone transfer, accentuate the ethnic and class differences in the two areas. While the suburban neighborhood in which Sierra’s team plays contains a spacious green field with grass and trees and lots of white people, Sierra’s ramshackle urban neighborhood appears to consist solely of dark gray buildings, an empty lot, and few or no people. Even the neat and clean apartment in which Sierra and her aunt live is dark gray and very small—the two share a bedroom, there’s a tiny kitchen, and a phone with a long cord hangs on the wall. The only hint we have about the rest of Sierra’s family is an open photo album containing “old pictures,” that sits on the coffee table.

It’s clear that the uncredited Spanish translator put a lot of care and thought into El fútbol me hace feliz, giving this weak story a much better feel than its original English counterpart. For instance, the first lines in the English text read:

Nothing makes me happy like soccer—
picked for this new team,
with these shiny girls.

(Nothing makes me happier than soccer.
I’m on a new team
with girls who are ready to go!)

While Boelts allows Sierra a little piece of agency in bringing the team to her barrio for one game, for the most part the young narrator disparages her own neighborhood. I’d rather see a story in which a young protagonist happily plays fútbol in her barrio’s makeshift soccer field, with garbage cans or used tires as goal posts, a game in which “any kid who shows up can play.” As it stands, Happy Like Soccer has a condescending and patronizing feel to it and is not recommended. This is too bad, because the story’s strong Spanish translation, El fútbol me hace feliz, showed some promise.