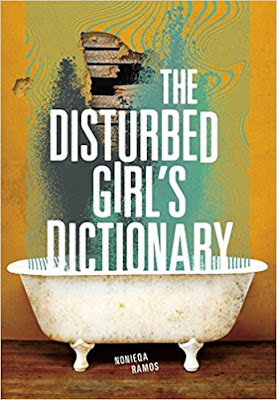 Macy Cashmere MYOFB was named for a sweater her mother found in a department store shopping bag. She’s a tough, strong-headed 15-year-old Borinqueña who’s been diagnosed with ADHD and labeled as “emotionally disturbed,” “compulsive,” and “learning disabled.” She and one of her two besties, George, are stuck in a Special Education classroom that provides little actual education.The one good thing in Macy’s life is her main bestie, Alma, who’s in the Gifted and Talented Program and whom few know is perpetually exhausted because, after school and through the night, she is responsible for the care of her “babies”—siblings, step-siblings and cousins, including three infants.

Written in a vignette style reminiscent of The House on Mango Street, Macy’s narrative is organized as alphabetically arranged dictionary entries, with each letter and “definition” hinting at or revealing a part of her life:

Macy’s story is not the sort of autobiography YA readers will expect, because she insists on using her own loud, inimitable voice—her own rough vocabulary and grammar and metaphor—to empower herself. She does this because she damn-well knows that no one else is gonna do it for her. And she never lets go:

Teacher Man glares at us. He is annoyed because our ignorant asses broke the school firewall again to check social media posts, but we can’t even pass a daily quiz.

Me: “Alma always never posts pics of herself. Even her profile pic is of one of her kids. Check it out. This girl is Alma’s mini-me. She always never—”

“Macy! George!” Teacher Man is staring us down. “Let’s talk about why we cannot use the words always and never in the same sentence.”“What do you mean by we?” I lean way back in my seat. People are always talking like that to me. Saying our and we…

Teacher pops a cap off a black marker and writes the sentence I said on the whiteboard in Caps Lock.

ALMA ALWAYS NEVER DOES THAT.

He’s trying to turn this into what he calls a teachable moment. Like that time he made us proofread all the graffiti in the bafroom.

With a red marker, he crosses out the word always and rereads it. He says, “See, always is what we call superfluous. It’s clutter.”

Macy lets Teacher Man know that he is pissing her off. Teacher Man says he’s sorry that she’s “angry.” Macy shows him the difference between being pissed off and angry by taking out History of the American People and editing it by crossing out “all the pages about shit that’s got nothing to do with me.” Teacher Man’s nostrils begin to twitch. Macy asks him if he’s pissed off or angry. Teacher Man escalates with a threat. Macy throws her desk, loudly accuses Teacher Man of “depriving my ass of a education,” and takes herself to the principal’s office.

Throughout, Macy empowers herself while she endures the chaos and danger of an impossible social and economic situation—her father’s in prison, her mother takes in “guests” by the hour and sometimes by the night, and her younger brother has been nabbed by CPS and put up for adoption. Macy’s hungry enough to steal anything edible and semi-edible from the grocery store and from anyone who’s not looking, and she carries a slingshot thong as a weapon. And she bluntly and honestly addresses readers and aggressively smacks down assumptions they may have about her:

I opened the fridge and pulled out the butter and syrup. In the cupboards was a shitload of Sudafed and I pulled out two bottles. I pulled the medicine cups off and made our favorite recipe. Inside the cups I squeezed a swirl of sugar, butter, and pancake syrup, the only things in the fridge. (What? You thought I was going to say I drank up all the Sudafed, didn’t you? You stereotyping motherfoe.)

Macy uses “MYOFB” almost as a surname, especially when she’s trying to keep control, when she senses a contradiction between self-revelation and maintaining some semblance of privacy. In some ways, she hides her family while she exposes them.

Ramos paints a few characters with a broad brush—Macy’s classroom teacher, for instance, who insists on “correct” grammar that eschews the complexity of the street. The white couple who’ve adopted Macy’s younger brother, and are relieved to find that he has “only” Asberger’s rather than an intellectual deficit. Another teacher, a white woman who genuinely cares about Macy—and then packs up and leaves town. On the other hand, readers will get to know some secondary characters, including a sex worker whom Macy befriends, a woman who clings to survival in a place in which survival is not a given. And of course, there is Alma, whom readers may have hoped and expected would emerge unscathed.

Macy Cashmere MYOFB exists in a cray-cray world of racism, poverty and dysfunction, a one-size-fits-some educational system, and dysconscious white-savior wannabes. She fears nothing and no one. With both hands on the machete her great-grandma had used in the sugarcane fields, hidden in her pocket an antique silver pen she’s stolen that’s “sharp enough to cut out someone’s heart,” and with her spirit focused on Agüeybaná II, the Great Sun, this brave young Borinqueña named after a department store is at war. She takes crap from no one and nothing—not the “educational” system that fails young people who can’t or won’t conform, not the mental health institution that medically enforces passivity, not the white “savior” families whose self-involvement trump emotional attachment. Rather, Macy Cashmere MYOFB knows who she is, what she comes from, and that, somehow, she will survive.

The Disturbed Girl’s Dictionary is empowering for YA readers who may never have seen themselves and / or their difficult lives honestly and compassionately portrayed—by a protagonist-narrator who takes charge of her own life and her own story. It’s highly recommended.