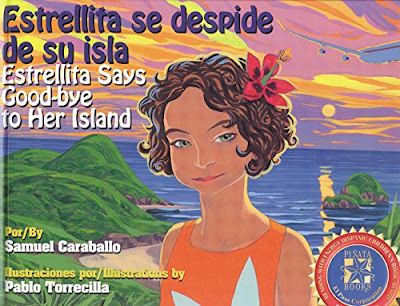 Both of these stories transported me back to Puerto Rico. Years ago, as our plane began its descent into San Juan Airport, almost everyone began singing, “En mi viejo San Juan.” This beautiful song, written by Noel Estrada in 1943, begins, “En mi viejo San Juan, cuantos sueños forje en mis noches de infancia,” which means that Puerto Rico never leaves us, not even in our dreams.

The first story, Estrellita se despide de su isla, is a poem, a love song from a child to her island. From the window of the giant plane, the sorrowful child says, “¡Adiós mi preciosa isleta, pedazo de mi corazón!” (“Goodbye, my precious little island, darling piece of my heart!”) In the detail on the left and full illustration on the right, the child’s green eyes and brown hair reflect the rich greens of the land and the browns of the mountain, and the blue wisps and tendrils of her hair hold the blues of the sea and sky.

As readers turn the pages, the airplane is high in the sky, shrinking, going north. And the child is storing in her memory her home, her town, the beach, the coquis (national frogs) in her hands and her hair and on her bed, the rooster, the wind drying the laundry on the line, the hibiscus flowers and the little white goat in the mango tree. And being with her friends, and the street musicians and people dancing plena and the aroma of hot coffee.

The child’s name is Estrellita. It means “little star.” She doesn’t know when she will return, but she will always remember “tus cielos, tus ríos, tus encantos / con los que el pintor sueña, / y las gloriosas notas de mármol / de tu exquisita canción caribeña.” (“Your skies, your rivers, your charm / All of which the painter dreams, / And the glorious marble notes / Of your exquisite Caribbean song.”) 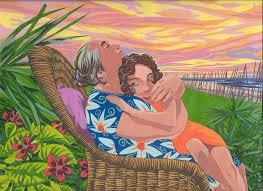 And most of all, she will hold in her memory “el tierno, angelical abracito / de mi abuelita Panchita / quien, como tú, es mi amorcito, / mi luz y mi valiosa perlita!” (“the tender, angelic hug / Of my grandma Panchita / Who, like you, is my little love, / My light and my precious little pearl!”) Here, as they hug, grandma’s dress is patterned with hibiscus on a background of blue, and the blue highlights in her hair reflect the sky and the sea. 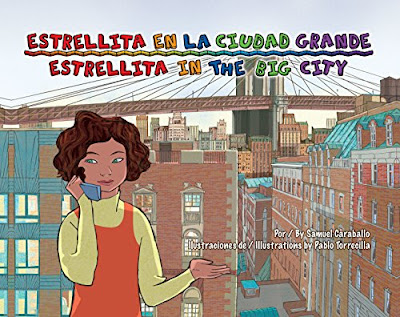 In Estrellita en la ciudad grande / Estrellita in the Big City, the child and her dad have arrived in Brooklyn, “la ciudad grande.” Estrellita hasn’t unpacked yet, because she has something more important to do. In the small hotel room, she’s covered the bed with a brightly colored quilt that she has brought from home, and a small hibiscus plant—in a pot—sits on the window sill. Now, sitting at the edge
of the bed, Estrellita looks down at the telephone she holds in her hand. She’s waiting and waiting. The phone finally rings, and lágrimas de felicidad (“happy tears”) flow from Estrellita’s eyes.

On the other end is Estrellita’s abuelita, and their conversation is deep. In PR, abuelita is still selling fritters to pay her bills and still going fishing, she jokes—to keep herself young! Estrellita tells her abuelita that her dad is out with Tío Carlitos and Tía Luisa for a job interview, and hopes to find an apartment soon. She can’t wait, Estrellita tells her abuelita, to have her own room—“¡Para acostarme en mi cama y soñar con el día en que te vuelva a ver¡” (“To lie in my bed and dream of that day when I get to see you!”) But before her abuelita begins to cry, Estrellita tells her her “New York stories.” These include seeing the at-first unreadable signs and billboards, the Verrazano Bridge, the skyscrapers that look like giant mirrors, the elevators and escalators, and even giant food—“Los perros calientes medían un pie de largo. Los pretzels eran tan grandes como las panderetas y ¡los vasos de refresco eran más grandes que la cubeta que usas para la carnada!” (“The hot dogs were one foot long, the pretzels as big as tambourines, and the cups of soda bigger than your bait bucket!”) Caraballo wrote both stories in Puerto Rican Spanish with Puerto Rican references. The language is good and authentic, informal “people” language, el sonido de la gente. Later, Caraballo wrote the English versions, and neither is a direct translation of the other. Either way, children and those who read the books with them will feel “at home” and comfortable.

Estrellita’s description of the city is detailed. It’s what a kid would say or write, noticing facts that everyone would be interested in. When she’s in the subway, she notes that there are candy bars and clothing and shoes for sale, and there are people playing kettle drums and congas.

While Estrellita describes the sights and sounds of the city to her abuelita, young readers can look to the visual details separating the Spanish and English texts on the left-hand page—most are of Abuelita on the phone, sitting on her old cane-woven seat on the beautiful Puerto Rican beach, quiet and peaceful—looking out at the sea and talking with her beloved nieta. This contrast is what the song is about—even though you leave and you’re in a new place, you’ll always have the memory of the hibiscus, the beaches, the coquís.

Both Estrellita se despide de su isla and Estrellita en la ciudad grande place the Spanish title above the English on the covers and position the Spanish text at the upper part of each left page, with the English on the lower part. The languages inside are separated either by a detail of the illustration that appears on each facing page (in Estrellita se despide de su isla), or a detail that represents a contrast between “home” and “away” (in Estrellita en la ciudad grande.) This technique signals to young readers that Estrellita and her family are Spanish-speakers, that the English is a translation—and that home is never far away.

Torrecilla’s full-bleed paintings, rendered in marker and opaque-toned gouache, complement the Spanish and English texts and convey shades of meaning as well. In Estrellita se despide de su isla, he uses swirling colors to accentuate the brightness and beauty of Puerto Rico’s symbols: the hibiscus, (the national flower) the coquí (the national frog), and the beaches (the national treasure). Torrecilla’s artwork also portrays the everyday joys: musicians playing on the streets while folks dance, the laughter and fun, the rich smell of coffee—the real feel of beauty and life in Estrellita’s PR.

And in Estrellita en la ciudad grande, his “New York” colors are more subdued and shadowy—the huge rectangular buildings with people on the ground, looking up; or on a roof, taking photos. And the darkened underground subways, with people running to catch their trains. And the musicians, of course. The illustrations here show the contrast between the full-bleed on the right, and the detail that divides the Spanish from the English text on the left. When Estrellita is next to the Empire State Building, the insert on the left depicts a house on the beach or small fishing boats. In contrast to the Puerto Rican countryside, Torrecilla captures the complexity and intensity of the city. Everything’s bigger in the city. But when they are walking around Brooklyn to get to know the city, she eats empanadas de carne, una papa relleno y una croqueta, just like in PR. And when she goes into a music store, she teases her grandmother, asking her what song they are playing. After two guesses, Estrellita tells her: they’re playing “En mi viejo San Juan”!

The beaches and beach-front homes, both in the bleeds and in the inserts, seem to flow from the artist’s hands. Estrellita is leaving her beloved abuelita and everything she knows and loves; at the same time, although Estrellita longs for her PR home, in Brooklyn she finds a multiethnic, intergenerational place where she can laugh and dance and be happy—and still be free to long for her home.