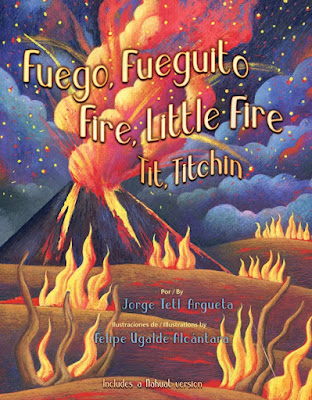 In just about every Indigenous culture and language, there are millennia-old teachings about fire and water. Wherever and whenever these teachings are spoken or sung, children learn from their elders that, without air, fire and water, no living thing can exist.

In this breathtaking trilingual poem that complements their earlier Agua, Agúita / Water, Little Water / At Achipiga At (Piñata Books, 2017), Argueta and Ugalde Alcántara team up to gift youngest readers and listeners another chapter in the story of life.

Narrated by a little one who likes to be referred to as “la chispita” or “little fire” or “titchin,” Fueguito is born from a tiny spark “on our Mother Earth / beneath our Father Sky” and flits around like a firefly. On a journey everywhere, Fueguito becomes bigger and smaller and bigger again and can be seen “in the volcano / in the mountain / in two sticks of wood / rubbing against each other.” Now Fueguito is on a stone striking against another stone, now in a bolt quickly flashing across the sky, now burning wood to provide heat—and always singing, laughing and dancing:

Fire, Little Fire,
I am a flame, a little flame.
A spark, a little spark,
the joyful energy of life.

On one page, for instance, as Fueguito sings “among the stones,” Alcántara Ugalde shows readers the breathtaking Tse’Bii’Ndzisgaii, the Navajo Nation’s Monument Valley. Here, the angle of the sun behind them lights up these enormous, sacred sandstone formations that span Utah and Arizona.

The Spanish and English texts on the left-hand pages fall on textured, sandy-yellow backgrounds, with each pair of texts divided by a small symbolic representation influenced by traditional Mesoamerican art. So while Fueguito sings, young discerning readers can take in the amazing design and color and movement on the right-hand pages, and they can also identify these stylized details and relate them to the images on the opposite page.

Argueta first wrote this awesome song in Spanish, his second language. Later, he wrote the English version, with neither being a direct translation of the other. In this way, both hablantes and English readers will appreciate the beauty and rhythm of whichever version they choose to read. As well, bilingual readers will see how a song can have subtly different lyrics and still maintain its wholeness and beauty.

It’s unfortunate that the Nahuat version—Argueta’s first language and the language of the Pipil Nahua, Indigenous people of El Salvador and Mexico—is given short shrift. Relegated to one page at the end of the book, with no illustrations except for the opposite full-bleed depicting a roaring blaze, the Nahuat version is impossible for children to follow. There are no visual cues, and no way to compare it with either of the other two languages. As well, the Nahuat title on the front cover is smaller than the Spanish and English, and there’s a small line at the bottom that reads, “Includes a Nahaut version.” Although it’s listed in the summary on the CIP page, there’s no other reference to it. Since Argueta acknowledges and thanks four Nahuat speakers for their assistance, this decision was apparently made by the publisher.

This book design—as with that of Argueta’s and Ugalde Alcántara’s previous work, Agua, Agüita / Water, Little Water, which had the same problem—could easily have accommodated the Nahuat version, and since this poem / song is a First Nations’ teaching, placing it in the primary spot would have empowered Indigenous young children to see an Indigenous language on par with two colonial languages.

Nevertheless, for the great beauty and teaching that it encompasses, Fuego, Fueguito / Fire, Little Fire / Tit, Titchin is highly recommended.