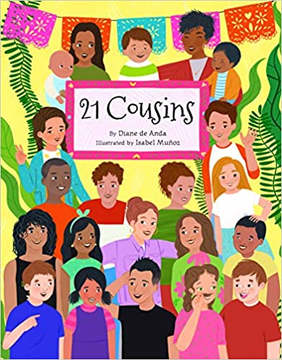 On the frontispiece, the young narrators—grade-schoolers Alejandro and Sofia—stand on a stairwell, talking with each other. They’re about to introduce readers to each of their 21 cousins. Young readers will see that this book is, in effect, a “photo” album, with one page for each member of this diverse, loving family.

The first spread, which contains black-and-white wedding photos—of Abuelo Pedro and Abuela María in 1953; Abuelo Juan and Abuela Marta; and tías Rosa María and Juanita as teenagers—are together a testament to the family’s mestizaje. As with all mixed families, relatives “look different in many ways.”

Alejandro and Sofía invite young readers to meet their “primos and primas.” Some of them: Cousin Enrique (“Kiki”) is a football player who has “long, strong legs.” Cousin Elena, whose nickname is “Guera” (“Whitey”) because she is light-complected, wants to teach in English and Spanish. Twins Tony (who plays soccer) and Tonia (who plays basketball) are tall. Young Teresa, who’s called “Morena” because she has “milk-chocolate skin,” likes to jump rope. Baby Miguel has no hair yet, so his nickname is “Pelón (“Baldy”). Martina (“Teenie”) is a gymnast.

Some adult readers from outside the culture may find offense at some of the nicknames the relatives give each other. Don’t. Loving teasing among close friends and relatives is indigenous to Mexican culture and to other cultures as well.

Lesser authors would have called undue attention to some of the relatives for their disabilities or differences. Diane de Anda doesn’t. Rather, she sometimes mentions a disability as one element of a child’s life, and then lets it go. For instance:

Eight-year-old Beto “goes to a special class in school. He has Down syndrome. Sometimes he needs our help to do things.” Alejandro and Sofía make sure that readers also know that Beto has fun playing games with them and sharing their favorite flavor of ice cream, dulce de leche. Another page shows Maricela, who “can spell words in Spanish and English” and “won the third-grade spelling bee.” That Maricela uses a wheelchair is shown but not even mentioned. Rather, everyone “cheered when she rolled up the ramp to get her trophy.”

In the final spread at the end of Alejandro and Sofía’s introduction to each family member, the two pose for a family portrait—in which they welcome cousin number 22, Baby Christina.

Using a bright spectrum of colors, soft strokes, and a lot of background detail, Isabel Muñoz created her vibrant, expressive artwork on a digitally manipulated “canvas.”

Writing and illustrating a children’s picture book that describes the lives of 21 individuals in a family—and holds the attention and imagination of very young children—is no easy task. But Diane de Anda and Isabel Muñoz have pulled it off, seemingly effortlessly.

Diane de Anda’s outstanding writing and Isabel Muñoz’s gorgeous artwork give new meaning to the term, “We are all related.”