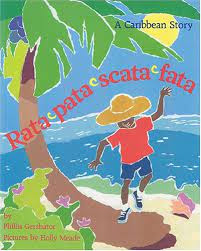 #OwnVoices was not the first such movement. Since 1994, the Cooperative Children’s Book Center of the School of Education at the University of Wisconsin-Madison has collected and documented books for children and teens by and about Black, Indigenous and People of Color (BIPOC). Each year, CCBC releases a list of “Diversity Statistics,” a helpful guide for educators, publishers, and others in the field.

All of this doesn’t mean that every single published children’s book used in libraries and classrooms is required to have the #OwnVoices and CCBC imprimaturs. But it helps. It is within this context that Phillis Greshator and Holly Meade’s picture book, Rata pata scata fata: A Caribbean Story is reviewed.

Illustrator Holly Meade’s brightly colored torn-paper collages, with white borders surrounding the characters, trees, foliage, and land areas, are gorgeous. Entirely double-page spreads convey the expanse of the tropical Caribbean land and leave plenty of room for the characters as well. Young Junjun and his mother are close, and realistically portrayed. She is warm and loving and very, very busy. He is active and likes to play. They are part of the land and the land is part of them.

It’s the story that is problematic. Junjun’s mother wakes him and asks him to do a few chores while she does the laundry. Instead, he stays home, leans against a tree, and chants, “rata-pata-scata-fata”—while wishing for the chores to get done by themselves. They do: A fish flops out of a fisherman’s basket and into Junjun’s arms. The family goat returns home. A big wind fills Junjun’s basket with tamarinds. And each time, Junjun lies to his mother. Finally, when his mom asks Junjun to fetch some water from the well, he convinces her to chant “rata-pata-scata-fata”—and rain fills the empty rain barrel. The chores have done themselves and all is well.

Here’s what young readers might well take away from this story:

African-Caribbean children get away with lying to their parents.

Thank you to my friend and colleague (not to mention dedicated librarian) Betsy Bird.