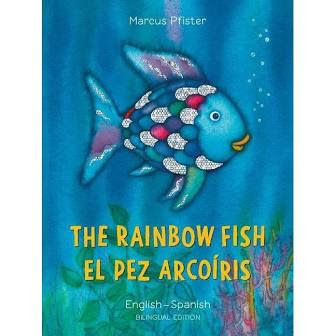 In 1992, Marcus Pfister wrote, illustrated, and published Der Regenbogenfisch in Switzerland. In 2019, Dr. Kristy Koth translated the story into English (The Rainbow Fish); and Dr. Olga Balboa Sánchez set it into Spanish (El pez arcoíris). This English / Spanish bilingual story is the product of these talents.

On the cover is a fish—“the most beautiful fish in the ocean”—whose textured scales literally sparkle in all the colors of the rainbow. As the story begins, the other fish invite him to play, but he ignores them because he’s way too busy showing off his sparkling scales. When a little blue fish asks him for one of his beautiful scales, he refuses to share. This guy—let’s call him “Rainbow”—is so full of himself that the other fish decide they no longer want anything to do with him—and he becomes “the loneliest fish in the whole ocean.”

On the advice of a helpful starfish-therapist, our sparkly-but-egotistical Rainbow consults the ocean’s resident wise Octopus, who suggests that Rainbow give each fish one of his scales—so he could trade, as it were, beauty for friendship and happiness. This is a majorly difficult choice for Rainbow.

But once he starts giving away his sparkly scales—the first one to the little blue fish who had previously asked him for one and whom he had rebuffed—Rainbow changes. He begins to feel happier with each gift and he begins to know what it is to have friends—“The more sparkly the water became, the more he enjoyed being among the fish.” In the end, Rainbow has only one glitter-scale left, and each of the fishes has one as well. And the entire ocean sparkles.

Pfister’s ink and watercolor art on a blue, green and sometimes purplish “ocean” background enhances Rainbow’s colorful metallic glitter scales; and as Rainbow distributes his sparkly scales to the other ocean denizens—leaving only one for himself—he realizes what it is to be happy, and goes off to join them in play. Two particular favorites are the illustrations in which Rainbow gives one of his sparkles to the excited and happy little blue fish, and another in which all the fish—each with one sparkly scale and a fishy grin—swim around Rainbow.

Rather than producing an exact Spanish translation, Dr. Olga Balboa Sánchez’s use of conversational Spanish demonstrates her own storytelling talent. For instance, where the English reads, “But he wasn’t a normal fish, no!” the Spanish reads, “¡Pero no era un pez cualquiera, no!” (“But he wasn’t just any fish, no!”) And when Rainbow ignores his friends, gliding past them, “silent and proud, letting his scales glitter,” the Spanish reads, “Pero el pez Arcoíris siempre se deslizaba callado yorgulloso a su lado mostrando sus escamas brillantes” (“But the Rainbow fish always glided quietly and proudly by their side showing his shiny scales.”)

With shimmery holographic art providing the textured fishy sparkles, The Rainbow Fish / El Pez Arcoíris is a delightful story that encourages young children to experience the joy of sharing.