Papa Gave Me a Stick 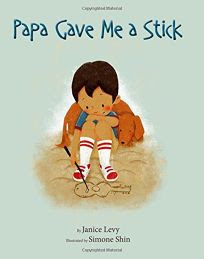 On the cover, a young Mexican child sits on the ground in his barrio. With his dog serving as a cushion, the child uses a stick to carve out his dream: owning a mariachi guitarra with a leather strap and fringes.

When they hear music in their courtyard, Antonio and his father run out to enjoy a performance by the local mariachi.

Papá y niño see and hear a traditional Mexican mariachi—one plays una vihuela Mexicana (a Mexican violin), another plays una trompeta (a mariachi horn), and several play their guitarras. The child is mesmerized, and tells his father that he wants a mariachi guitar. But his dad can’t afford one (“Ay, hijo, I have no money for such things”), so he gives his young son a stick instead.

Papa Gave Me a Stick transforms a Japanese Buddhist folk tale, “the straw millionaire”—in which a poor man, starting with a single piece of straw, becomes wealthy through a series of successive trades—into a morality tale: a “give and ye shall receive” for young children.

Simone Shin used a combination of pen and ink with acrylic paints and digital finishing, to create her spare, uncluttered illustrations. Her style, especially in the backgrounds, evokes soft colors and subtle textures. The Mexican characters are individuals, with varying skin tones and body types. The detailed mariachi instruments are right on target, and the backgrounds, many of which are white or a single muted color, leaves plenty of room for Antonio, his father, and his animal friends.

When the boy brings home his cherished prize and tells his father how he earned it, his father laughs: “All that to earn your guitarra” (which diminishes all that this child has done and the value of what he has earned). Then he divulges that, as a boy, he also earned a guitarra after his papa had given him a stick.

If the boy’s father earned his guitarra in the same way as his son, what happened to it? (In mariachi families, the instruments are passed down. And there’s a lot of serious study with teachers and relatives and a ton of practice—not to mention fundraising and community service—before someone is recognized as a mariachi.)

Papa Gave Me a Stick is a warm story that demonstrates kindness to animals without asking anything in return. The story is soft and gentle, with a rhythmic cadence, uncluttered artwork, and an unspoken message of reciprocity. The story demonstrates a close relationship between a Mexican father and his young son.

The adobe buildings with gates at the windows, a cobblestone street, and a hanging string of papel picado in the courtyard, are reflective of small Mexican towns in which street mariachi often play.

In the illustration where two mariachi are playing their instruments, the “violin” should be violín, and the “horn” should be trompeta (trumpet). (The names of the five major mariachi instruments are shown in the back matter, but not as part of the story. This takes away important cultural information.)

• As Antonio accepts each gift from a particular animal, he dismisses its value: “What good is this?” What’s the point of his reacting rudely in a story that focuses on empathy and generosity?

• While everyone else is enjoying the mariachi performance, the story reads: “The mariachis [sic] sing as they strum their strings. But Antonio hardly listens. He is too busy staring at the mariachi’s guitar.” Why is Antonio portrayed as an empathetic kid who helps animals in need—and as an obsessively materialistic little boy who doesn’t even appreciate his own people’s music? Although he longs to own a mariachi guitar, he has no particular interest in becoming a mariachi. In a sense, this story objectifies both the mariachi culture and its material aspects.

• Another problem is that the Spanish words and phrases appearing in the story are italicized. Why are they italicized? And they’re immediately translated into English, even in dialogue. Like this: “ ‘¡Qué bueno! Good for you!’ Papa laughs.” Bilingual people do not talk like this—unless they’re kindergarten teachers of English as a Second Language (ESL).

• And finally, except for the bride, who “stands alone at the altar, (stereotypically) scowling and tapping her foot” because her novio misplaced the wedding ring, why is just about everyone else (including the animals) male?

The author’s intended audience is clearly not Mexican or Chicano kids. Rather, she apparently envisioned and wrote this story to appeal to a “universal” child audience, which dismisses those young people who want and need books that speak to them.

Papa Gave Me a Stick is not recommended.

[Random note: The second creature young Antonio helps appears to be a male bluebird (el pájaro). “ ‘¡Qué hambre! I am so hungry!’ chirps el pájaro. ‘I am too weak to build my nest.’ ” (Actually, male and female bluebirds gather material and build the nest, but the male generally does more gathering and the female generally does most of the work.) Bluebirds eat insects, and will eat fruit if they can’t find any insects. But tortillas? No.]